Vivaldi has a reputation for being an extremely customizable Chromium-based browser, all while working very fast. It was created by the same developers that brought us Opera, and shares many of those same genes. After staying exclusively on desktops for the past three years, Vivaldi is finally available as a beta on Android starting today.

The browser greets users with the same home page they’ll recognize from desktop, with its Speed Dial tiles that allow you to access a customized selection of websites you’d like to have readily available. Vivaldi’s bottom bar consists of quick-access buttons for bookmarks, history, downloads, and a note-taking feature, along with back and forward navigation, a tab switcher, and a Speed Dial button that turns into a search icon once you’ve clicked it to get to that part of the app. 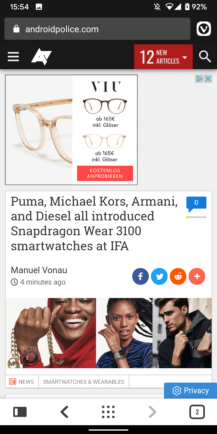 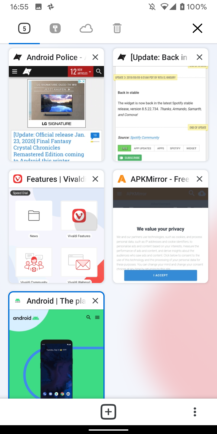 The bottom bar is context-aware and changes buttons depending on where you navigate within the app.

While the back button might be superfluous on Android, the forward button is a welcome addition that I’ve missed during many browsing sessions. The tab switcher interface, on the other hand, is arguably less intuitive than Chrome’s, even if it shows more tabs at once. You can’t swipe away any you don’t need, and instead have to hit the small “x” on top of each preview. Because the icons for the tab switcher and Speed Dial look similar enough, it becomes hard to discern which to hit to get to the desired screen — it doesn’t help that tabs and Speed Dials have the same layout, either.

Vivaldi has some tricks up its sleeve, though. In the overflow menu next to the address bar on top of the interface, it adds an option to capture complete websites with a built-in screenshot tool, allowing you to take scrolling screenshots even if your phone doesn’t natively support it. You’ll also find an option to duplicate or “clone” a tab in there – a feature that’s only available on desktop for Chrome users. Beyond that, it has a fully-functional sync feature that saves your tabs, bookmarks, and passwords. The company says that its service is end-to-end encrypted and thus better protected than Google’s.

The beta is already live on both the Play Store and APK Mirror and can be downloaded right now by anyone interested — there’s no special pre-release program in place. Since this is just the beginning of development, we can expect the browser to add more customization options further down the line its desktop sibling is known and beloved for.