Ricoh has a well-earned good reputation when it comes to building smart, technically excellent photographic equipment – including the almost legendary Ricoh GR series of pocketable APS-C cameras, which are a favorite among street photographers everywhere. Earlier this year, the company released the Ricoh Theta Z1, which builds on its success with its pioneering Theta line of 360-degree cameras and delivers a step-up in terms of image quality and build that will feel at home in the hands of enthusiast and pro photographers.

The Theta Z1 is what happens when you push the limits of what’s possible in a portable form factor 360 camera, both in terms of build materials and what’s going on on the inside. Like its more affordable, older sibling the Theta V, it shoots both stills and video in 360 degrees – but unlike the V, it does so using two 1-inch sensors – unprecedented for a 360 camera in this category. Sony’s celebrated RX100 series was pushing boundaries with its own 1-inch sensor in a traditional compact camera, and the Ricoh is similarly expanding the boundaries of 360 photography by including not just one, but two such sensors in its Z1. That translates to unmatched image quality for 360 photographers – provided you’re willing to pay a premium price to get it.

The Ricoh Theta Z1 feels a lot like previous iterations of the Theta line – it’s essentially a handle with two big lenses on top, which is a pretty optimal design overall for a device you’re mostly going to be using to hold up and take 360 photos and video. It’s a bit bulkier than previous generations, and heavier, too, but it’s still a very portable device despite the increased size.

With the bulkier build, you also get a magnesium outer case, which is textured and which feels fantastic when held. If you’ve ever held a pro DSLR or mirrorless camera, then the feel will be familiar, and that says a lot about Ricoh’s target audience with this $1,000 device. The magnesium alloy shell isn’t only for making it feel like it’s worth what it costs, however; you also get big durability benefits, which is important on a device that you’re probably going to want to use in remote locales and off the beaten path.

The build quality also feels incredibly solid, and the button layout is simple and easy to understand. There’s a single shutter button on the front of the camera, just above an OLED display that provided basic info about remaining space for images or video, battery life and connection status. A single LED indicates both mode and capture status information, and four buttons on the side control power on/off, Wifi and Bluetooth connections, photo and video mode switching and enabling basic functions like a shutter countdown timer.

Using the hardware buttons to control the Theta Z1 independent of your smartphone, where you can remotely control all aspects of the camera when connected via WiFi and using the app, is intuitive and easy, and probably the way you’ll use the Z1 more often than not when you’re actually out and about. There’s little to worry about when it comes to framing, for instance, because it captures a full 360 image, and since you can handle all of that after the fact with Ricoh’s editing tools prior to sharing.

On the bottom, there’s a USB-C port for charging and wired data transfer, and a 1/4″ standard tripod mount for attaching the Z1 to tripods or other accessories. This is useful, because if you use a small handle you’ll get a better overall image, since the Z1’s software automatically edits out the camera, and, to some extent, the thing that’s supporting it. There’s also a small lug for attaching a wrist strap, but what you won’t find is a flap or door for a micro SD card – the Theta Z1 relies entirely on built-in storage, and offers just under 20GB of usable storage. 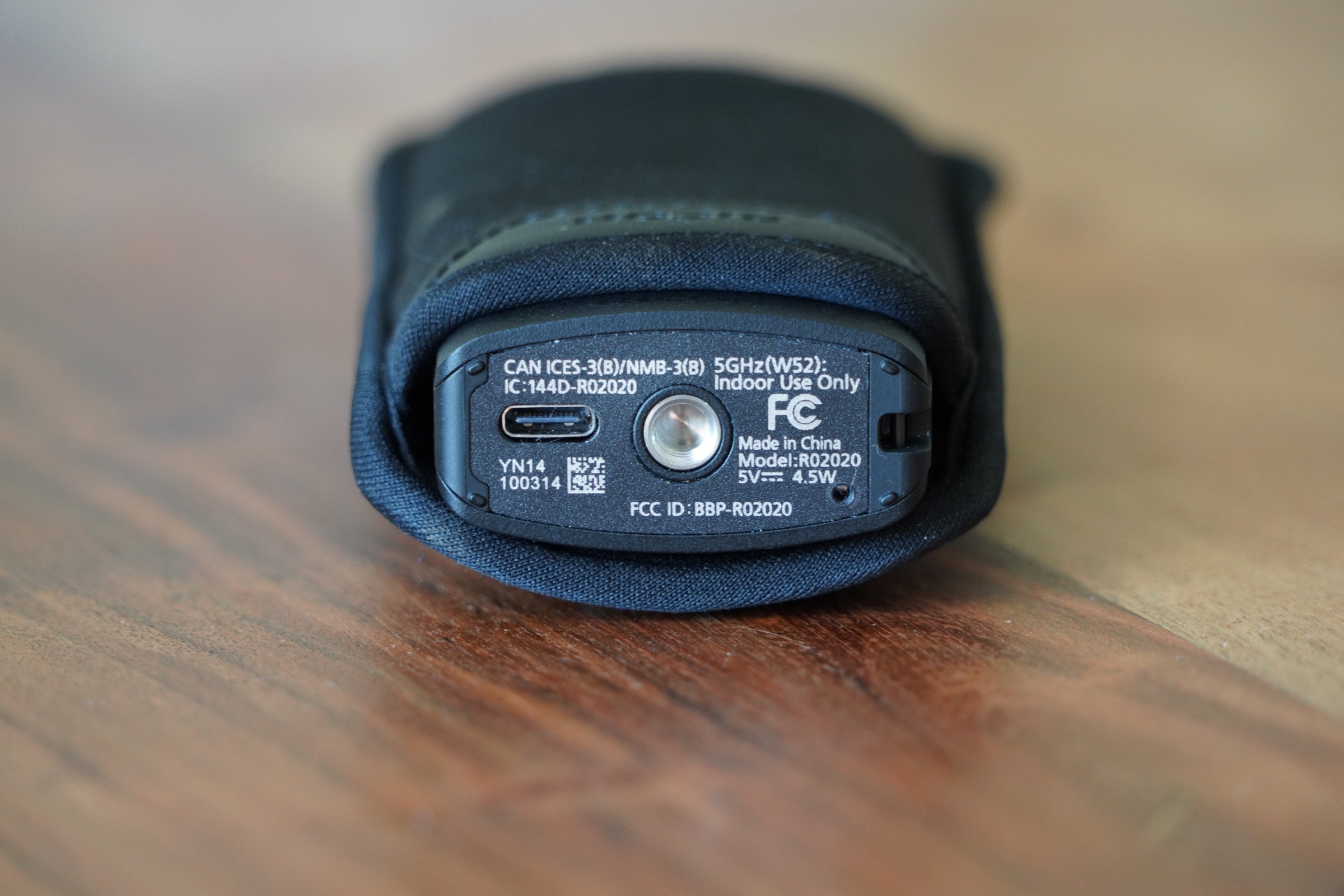 Ricoh’s Theta Z1 has two 1-inch sensors on board, as mentioned, and those combine to provide an image resolution of 670×3360. The camera caputres two 180-degree fields of view from each lens, and automatically stitches them together in software to produce the final image. The result is the sharpest, most color-accurate still photos I’ve ever seen from a 360-degree camera, short of the kind of content shot by professionals on equipment costing at least 10x more.

The resulting images do incredibly well when viewed through VR headsets, for instance, or when you use Theta’s own 360 viewer for web in full-screen mode on high-resolution displays. They also make it possible to export flat images that still look sharp, which you can crop and edit in the Theta+ app. You can create some truly amazing images with interesting perspective that would be hard to get using a traditional camera. 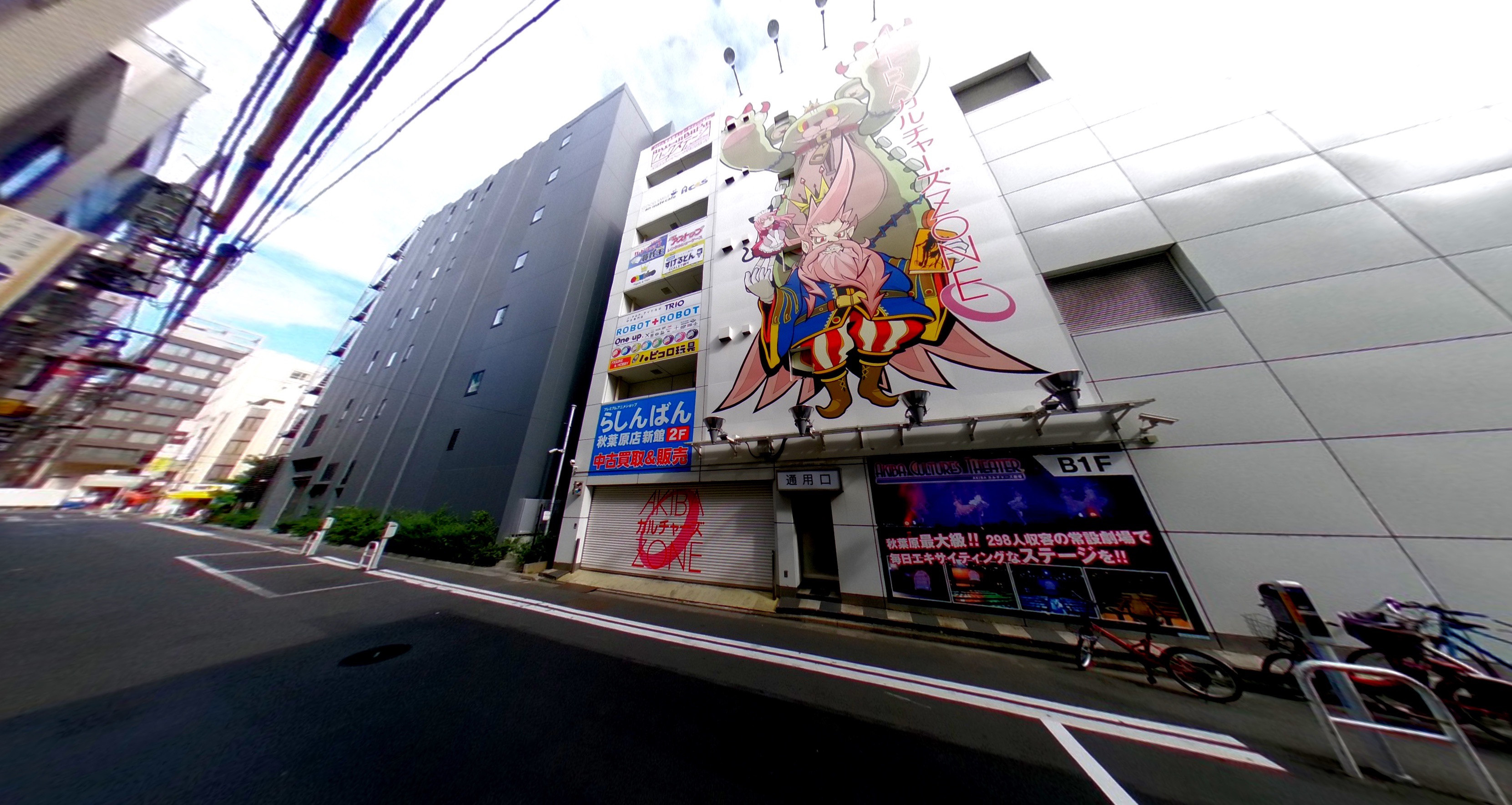 Indoors in low light situations, the Ricoh Theta Z1 still performs pretty well, especially compared to its competitors, thanks to those big 1-inch sensors. Especially in well-lit indoor environments, like in the restaurant example below, details are sharp and crisp across the frame and colors come out great.

In settings where a lot of the frame is dark or unevenly lit, as in the example at the Robot Restaurant in Tokyo below, the results aren’t nearly as good when operating in full automatic mode. You can see that there is some blur in the parts of the scene with motion, and there’s more grain apparent in parts of the frame, too. Overall though, the audience is pretty well captured and the colors still look accurate and good despite the many different tones from different sources.

The Ricoh Theta Z1 still does its best work in bright outdoor settings, however – which is true for any camera, but especially for cameras with sensors smaller than full-frame or APS-C. It’s still definitely capable enough to capture images you can work with, and that provide a great way to revisit great events or memories in a more immersive way than standard 2D images can accomplish.

You can adjust settings including aperture to optimize your photo capture, including choosing between f/2.1, f/3.5 and f/5.6, with higher apertures offering higher resolution images. The built-in lens has been designed to reduce ghosting, purple fringe artifacts and flare, and it does an outstanding job at this. RAW capture allows you to edit DNG files using Lightroom, and it works amazingly well with Lightroom mobile for advanced tweaks right on the same device.

The Ricoh Theta Z1 does video, too – though the specs for the video it produces are essentially unchanged from the Theta V on paper. It can capture 4K video at 30 fps/56 mbps or 2K video at 30fps/16mbps, and live stream in both 4K and 2K. There’s a four-channel built in microphone for immersive audio recording, and it can record as much as 40 minutes of 4K or 130 minutes of 2K footage, though each individual recording session is capped at 5 minutes and 25 minutes for 4K and 2K respectively.

Ricoh has tougher competition when it comes to video in the 360 camera game – Insta 360’s One X has been a clear winner in this category, and has led to this camera even finding some fans when compared to action cameras like the GoPro Hero 7 and the DJI Osmo Action, thanks in large part to its fantastic built-in image stabilization.

The Ricoh Theta Z1 just frankly doesn’t impress in this regard. The sensors do allow for potentially better image quality overall, but the image stabilization is definitely lacking, as you can see below, and overall quality just isn’t there when measured against the Insta360 One X. For a fixed installation for real-time live-streaming, the Ricoh probably makes more sense, but video isn’t the device’s strength, and it’s a little disappointing given its still shooting prowess.

The range of editing options available either via Theta+ or using the DNG files in both mobile and desktop phot editing software for the Theta Z1 is outstanding. You can really create and compose images in a wide variety of ways, including applying stickers and text that stick to the frame as a viewer navigates around the image. Sharing from the Theta app directly works with a number of platforms, including YouTube, Twitter, Facebook and theta360.com, where you can get embeddable 360 images like those found in this post above.

Ricoh has done a great job making sure you can not only capture the best possible 360 images with this camera, but also share them with others. It’s also leading the pack when it comes to the range of options you have for getting creative with slicing up those 7K spherical images in a variety of ways for traditional flat image output, which is not surprising given the company’s heritage.

Simply put, the Ricoh Theta Z1 is the best 360 camera for still photos that you can buy for under $1000 – even if just squeaks under that line. It’s the best still photo 360 camera you can pick up for considerably more than that, too, given its sensor arrangement and other technical aspects of the device including its selectable aperture settings and RAW output.

The $999.95 asking price is definitely on the high end for this category – the Theta V retails for less than half that, as does the Insta360 One X. But I mentioned the Sony RX100 above, and the pricing is similar: You can get a compact camera for much less money, including very good ones, but the latest RX100 always commands a premium price, which people are willing to pay for the very best in-class device.

If want you want is the best still photography 360 camera on the market, than the Ricoh Theta Z1 is easily it, and if that’s the specific thing you’re looking for, than Ricoh has packed a lot of cutting edge tech into a small package with the Z1.