The Pixel 3a and 3a XL are pretty much already a steal at full price. For the XL’s $479, you get one of the best cameras in mobile photography, fast software updates, and a big ol’ six-inch display. Right now, Rakuten members can get it for even less: just $380.

Seller alldayzip has the 3a XL for $449, already $30 under MSRP, and coupon code ADZ15 will take another $69.01 off for a final price of $379.99. Considering the smaller 3a retails for $399, that’s a heck of a deal. The phones are new, not used or reconditioned, and you can choose between Clearly White and Just Black — Purple-ish is unfortunately sold out. 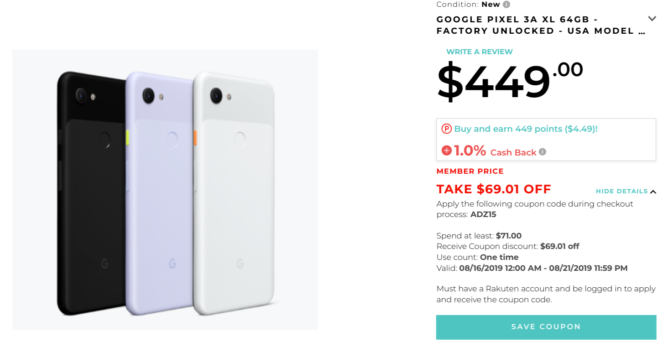 Alldayzip hasn’t accumulated many ratings on Rakuten, but it’s been selling on Ebay for years and has maintained near-perfect reviews. To get this deal, you’ll need a Rakuten account, but those are free. Hurry, though — the coupon expires tonight.

If you missed this short-lived deal the first time, you’re getting a second chance. Alldayzip is selling the 3a XL for $378 on Rakuten, a couple bucks less than before. 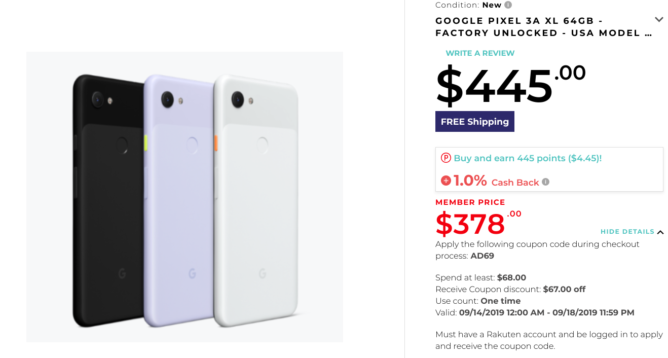 Enter coupon code AD69 at checkout to get this price. As is always the case with Rakuten deals, you’ll need an account to use the code, but they don’t cost anything. You’ve got until the end of the day September 18 to act.