What’s that new gap on your home screen? No, your phone didn’t get bigger—Spotify has decided to remove the playback widget from its Android app. The company has posted a message on its community forums about the change, and the response has been predictably negative.

The post about the removal cites the company’s desire to pour resources into the things that make for the best experience. However, it’s not like the widget needed a lot of upkeep—it was a pretty generic resizeable playback control with album art. Regardless, Spotify is purging it from the app this week.

Most comments on the original forum post are strenuously objecting to the removal. The response has been so strong that Spotify has acknowledged a new “Live Idea” on its site where people can vote to show their support for adding a widget. Spotify has marked the idea “Not right now,” but it’s watching the numbers. You know what to do.

Spotify seemed very sure of its decision to kill the Android app’s widget a few weeks back, but now it’s reversing course. After hearing from many, many customers, Spotify has announced that it will bring the widget back soon. The developers have made improvements to performance and visuals for the widget, and Spotify will restore the widget in a future app update. The “Live Idea” for bringing back the widget has changed from “Not right now” to “Watch this space” as a result. We don’t know when the widget will come back, but it’s happening. You did it, internet. 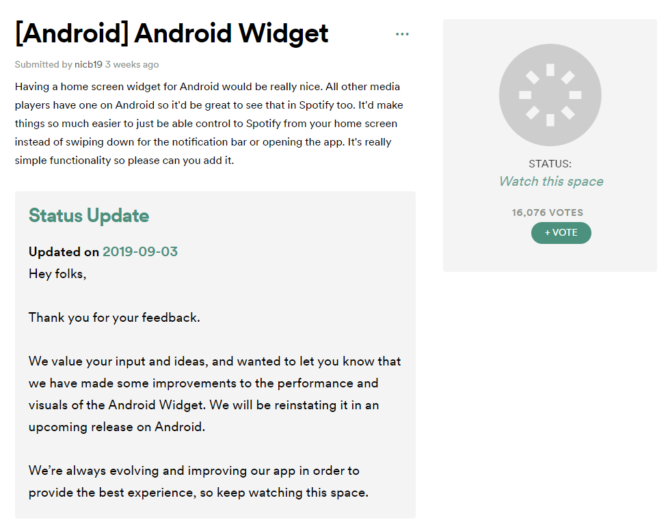 As spotted by eagle-eyed Redditor u/ProperNorf, the widget is back in Spotify’s latest beta on Android, v8.5.23.535. Thanks, Armando!