Fitbit has been around long before smartwatches became a thing and is synonymous with fitness trackers to this day. However, the company isn’t shy about its smartwatch ambitions and has already released some devices in this category, including the Ionic and the Versa. The manufacturer is building on this foundation and plans to release a new model of the latter. Renders already showed us what the Versa 2 should look like, and now, further leaks courtesy of TizenHelp and HRDLPN have surfaced, presenting the device and its packaging in full glory. TizenHelp claims it will hit shelves September 15.

While we already knew the Versa 2 is upgrading to an OLED display and 2.5D curved glass, we now have some additional information on the device’s hardware. As usual, Fitbit promises a battery life that allows for more than four days of use. The device provides enough storage to save up to 300 songs, which you can listen to via Bluetooth headphones. Further detailed specs aren’t available yet, though.

On the fitness front, the Versa 2 keeps the same tracking abilities as its predecessor (steps, floors, sleep stages, 24/7 heart rate monitoring, and 15+ exercise modes), though there’s also a mention of an SpO2 sensor in HRDLPN’s coverage. The first-gen Versa had that same sensor, but it was never activated, so take that information with a grain of salt.

No device is complete without a voice assistant these days. You will be able to use Alexa’s typical capabilities right on the watch, such as asking for the weather, dictating messages, turning on and off smart lights, and setting timers. The wearable also supports Fitbit Pay, enabling you to pay wirelessly without pulling out your phone.

Initially, the Versa 2 should be available in purple, black, blue, pink, and silver, but due to the interchangeable bands, color variations can be mixed and matched as you see fit.

TizenHelp cites sources who claim that the Versa 2 will be unveiled on August 25 and available for purchase starting September 15. Prices should start at around $200. Hopefully, Fitbit can breathe some fresh air into the smartwatch market. Apple is the only serious innovator in this business as long as WearOS remains crippled by outdated processors. 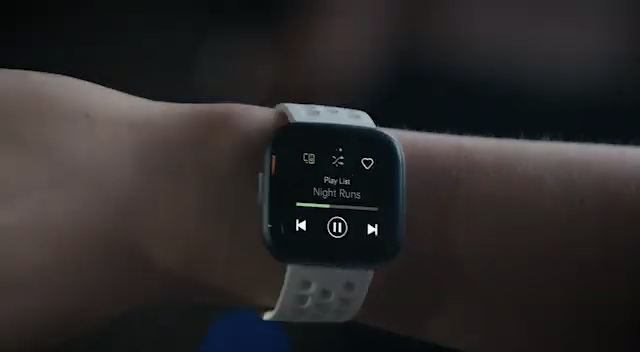 TizenHelp managed to find an unlisted Fitbit video on YouTube, showcasing the Versa 2 in action. In it, you can see a person using a native Spotify version right on the watch, streaming music from it to wirelessly connected headphones (as evident by the Spotify Connect icon in the top left of the screen). It’s likely that this integration will allow you to store Spotify songs locally, just like you could save your own music files to the first-gen Versa. As per the fine print at the end of the video, you’ll need Spotify Premium to take advantage of it.