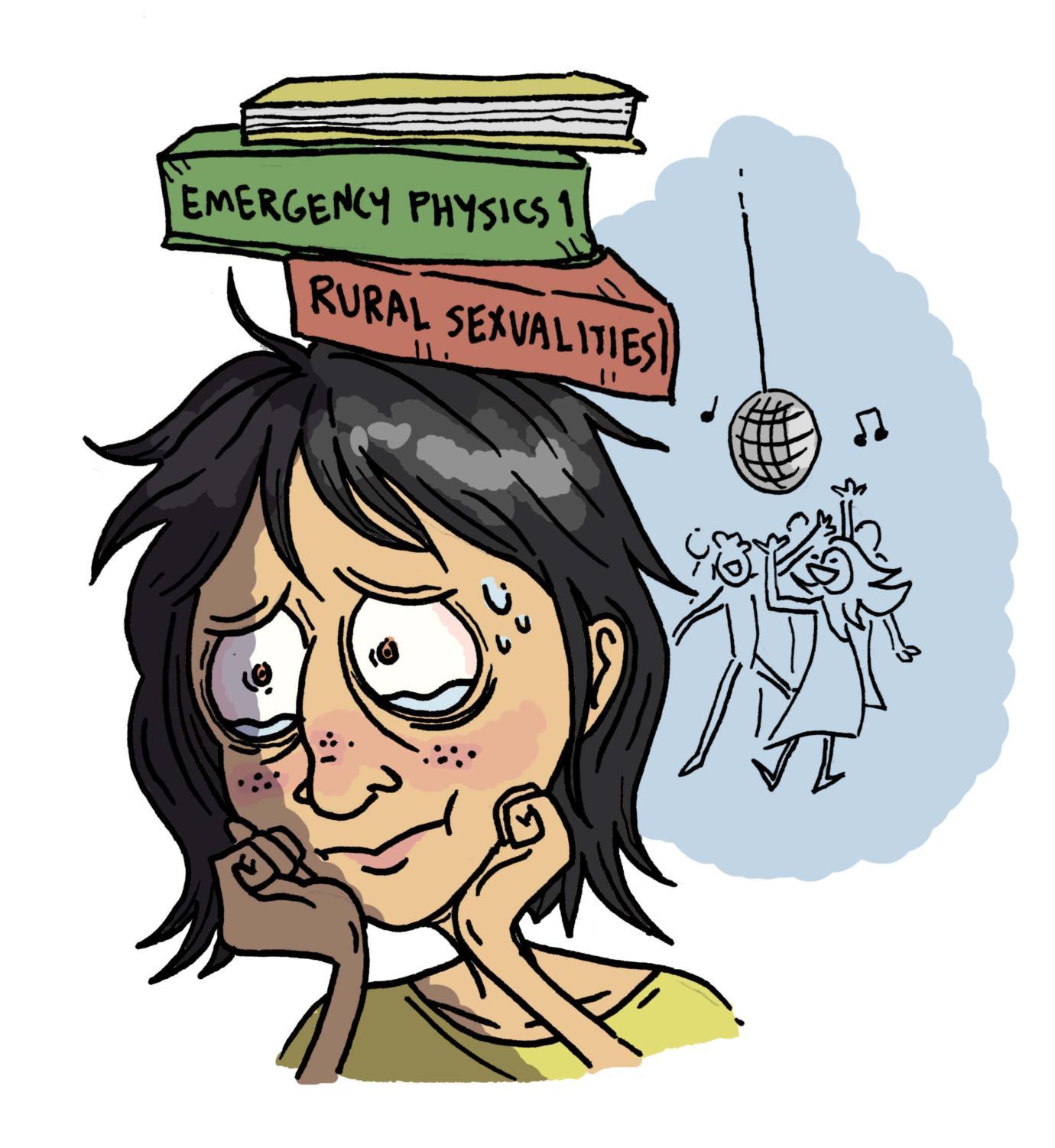 While I was scrolling through Twitter on the bus ride to my internship one morning this summer, I came across a viral tweet from a girl my age at another university.

“It’s a Friday night in September 2016,” Twitter user @megprattt wrote. “I’m in my freshman dorm, straightening my hair and putting on matte liquid lipstick to get ready for a night out. Obviously I’m wearing a choker. Kill the Lights is playing. There’s a bottle of pink lemonade Svedka on my desk. Life is good.”

The tweet received thousands of retweets and likes, and hundreds of responses from other college kids saying they related to it, and even some comments of people tagging their friends and saying “ugh, can we go back to this?” As a college senior, I was also a first-year in Sept. 2016, and though I do have some good memories from that time, I never look back on my times in Holland Hall — back when it was all girls, I know, I’m old — and think “wow, I wish I could go back.”

Your first year of college is inevitably hard, and I want all current first-years to know that if you’re not having the time of your life right now like everyone else seems to be, that’s okay. And you’re not alone.

These first few months of school can be tough, and social media and high expectations can make it so much worse. When I think of the beginning of my first year, I think of sitting on the floor of room 736 in Holland, watching movies with a close family friend from home attending nearby Carlow University. I remember scrolling through Instagram, seeing plenty of my peers from high school rushing Greek organizations, going to parties, and making new “forever friends,” all in the 3-5 weeks since we first moved in. It made me feel like I was behind because I was still close with my old friends and preferred hanging out with them over going to frat parties. I felt like I was doing college wrong.

I had gone to some parties, I had made some new friends, but I was not entirely happy. I’ve struggled with an anxiety disorder since I was 15, and moving somewhere new, trying to decide on a major and looking for new friends stressed me out. I’ve never been one to fake it, but some people might post deceptive things their social media, whether they realize it or not. Pictures on Instagram are not indicative of how people are really feeling and what they are really going through, and that can be very easy to forget.

I remember seeing posts from an acquaintance from high school, the daughter of one of my mother’s friends, who went to a massive university in the South known for its football and Greek life programs. She seemed to be living her best life, exploring her campus and making new friends. Her posts made it seem like she would never look back to her life in Moon Township, PA, where we grew up.

I also remember chatting with my mom during a phone call about the girl who went to the South and was having the time of her life, and how she had heard from the girl’s mother that she was just as homesick and struggling as much as I was.

I would never wish hardship on anyone, but I was still so relieved to hear this. I thought I was the only one who was having a tough time and missing out on the typical college experience. I thought I was the only one calling my mom in tears because things weren’t going as planned. But I most certainly wasn’t, and now, when I chat with my friends about our first-year experiences, so many of them echo this.

This reality is not specific to Pitt. A 2018 study from the American Psychological Association surveying eight different countries found that one in three first-year college students reported experiencing a mental health disorder. This problem is widespread. If you’re feeling depressed or anxious, you are most certainly not alone.

Beyond remembering that social media hardly ever tells the whole story of someone’s life, overwhelmed first-years shouldn’t be afraid to reach out to others to talk about their experiences. First Year Mentors and RAs will likely have plenty of advice on how to handle college schedules, homesickness and making friends. If you feel you need more serious help, consider reaching out to Pitt’s counseling center.

It is also very okay to stay in touch with your “old life.” There is a lot of pressure to find a new group of friends, and go out and do “college things” like attending frat parties and football games or going out on dates and having hookups. Nobody is required to do those things. Not doing the traditional college activities does not make you any less of a college student. For me, staying in touch with my friends from home and my family, and starting therapy was what helped me get through that first year. For you, it might be joining a club similar to one from high school, calling home every day or focusing on classes that make your first year a bit easier.

This all sounds bleak, but it does get better. I made it through my first year unscathed, and I ultimately found my perfect place in college in my sophomore year when I moved off campus with my friend from Carlow. Almost every night, we danced around our kitchen in our South Oakland apartment with Britney Spears playing as we made pasta and chicken nuggets that didn’t make my stomach hurt, which was a nice change from the Market Central food. These are the memories that me think “life was good.”

I also joined the Pitt News staff in my sophomore year, which helped me declare a writing major. TPN introduced me to so many people with similar interests, who I am close friends with now. We go out to Hemingway’s after long nights of editing. We go to Starbucks to complain about senior year workloads and grad school applications. We have the time of our lives together, but you won’t know that just by checking my Instagram, you’d have to be there with me in the moment, and I like it better that way. Everything fell into place for me, it just took time.