Samsung’s reservation page for the “next generation of Galaxy” (i.e., the Galaxy Note10) just went live, and with it comes a table of trade-in values. Parties interested in swapping their old phone for Samsung’s upcoming hardware can get up to $600 in value if they send in a Galaxy S10-series phone, iPhone X variant, or Pixel 3. Note that at the time of writing, that’s full credit for a Pixel 3’s as-new price.

So far, the page only lists trade-in values for Google’s devices (pictured above), Samsung’s handsets, and Apple’s iPhones. Only flagship-level devices from the last three or four years are listed. The oldest thing that will be accepted for trade-in is the iPhone 6S, which will net you a sizable $250 off. Humorously, that’s more of a discount than the later Galaxy S7 or S8 will get you.

While Google, Samsung, and Apple’s latest will net you $600 in credit, phones over about a year old fall off in trade-in value steeply, settling in around $300-200. 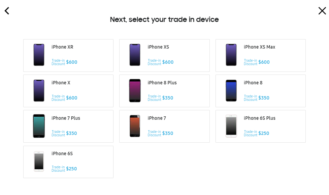 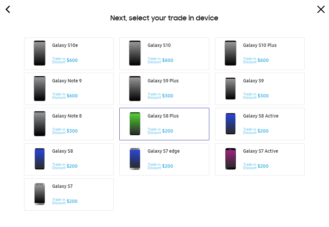 You can also register for early access to the upcoming phone(s), opting you into future promotional emails from the company that ostensibly allows you to “select your phone color and storage options” early, though the registration process itself doesn’t ask for that information.

If you do elect to jump on these trade-in offers, remember that Samsung has a documented history of not honoring these promotions to their fullest. While this is probably more of a value than you’d get trying to sell many of these phones used, there’s always a risk you’ll end up in the lurch without the credit you expected.