Earlier this month we learned that Bandai Namco would bring its collection-based Gunpla battle game to Android before the summer was over, and at the time an iOS listing offered a clue that August 21st would be the expected release date. It would appear that Bandai has pulled the trigger a little early. As of this morning, the English version of Gundam Battle is officially available on the Google Play Store.

The trailer above should provide a loose outline of what to expect from Gundam Battle: Gunpla Warfare. At its core, this is a free-to-play collection-based game that doesn’t stray far from the genre’s norms. Gameplay revolves around swiping on the screen to pull off a few different maneuvers and attacks. In order to take on your many enemies, you’ll have to build, customize, and upgrade your Gunpla to ensure that they perform to the best of their ability. The entire game is level-based, and these levels are broken up by story segments. This story chiefly revolves around school students that are trying to save their failing Gunpla club.

As expected, Gundam Battle is a free-to-play release. This means you can expect in-app purchases that range up to $79.99 per item, multiple currencies, and a stamina system. From the little that I’ve played the game appears to be balanced so that free players can enjoy the title without being forced to spend money, though it’s tough to tell if a grind wall awaits those the venture further into the game. Since today is launch day, the servers are currently getting hammered, so expect a few disconnects and slow loading times for the next couple of days. 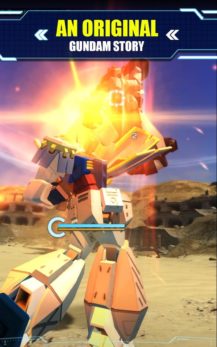 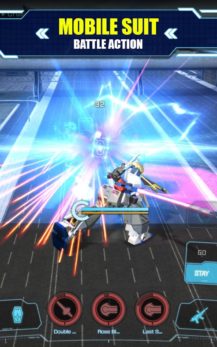 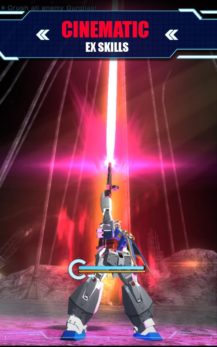 I’ve been a huge Gundam fan ever since I discovered the franchise while living in Japan in the ’90s, so the fact that Gundam Battle: Gunpla Warfare is the first Gundam game to come to mobile in the West brings a tear to my eye, though I sure would have preferred a premium game over an FTP release. That’s not to say that there isn’t any fun to be had with Gundam Battle, as it’s a slick title that encapsulates the fun and enjoyment of collecting Gunpla, I just wish that the devs had opted for something a little more original. As it stands there are already more than enough collection-based games on the Play Store, and even though I love me some Gundam, I can’t shake the feeling that I’ve been there and done that.