Social media continues to change dynamics in the coverage of events around the world, more so in a time when speed and accuracy of information in real time is of crucial importance.

From political events through to conferences and natural disasters, the impact of Facebook and Twitter principally cannot be underestimated. Sports is another area that hugely benefits from these platforms.

Two recent events underlined how crucial Twitter especially is to covering sports. The Women’s World Cup in France and the Africa Cup of Nations, AFCON, in Egypt.

In the case of the World Cup, particular reference is on the impact that one Twitter user had on information flow from across the cities whiles dishing crucial off-field light information pieces. The person in this case is Fatma Samoura – FIFA General-Secretary.

But this piece is hinged on the 32nd AFCON and how the football governing body deployed social media as a means to galvanize its information flow and maintain / sustain a vibe throughout the tournament.

Even post the tournament, there is a quality amount of mopping up ongoing – with exclusive interviews, behind the scenes shots and crunching of tournament figures.

We filtered out some stats from #TotalAFCON2019 for you ?#CelebrateAfrica pic.twitter.com/ePkbmnuntW

Photos and videos of the fans in the stands, of training sessions, of reactions before and after the games, match reports, daily rundowns, expectations for particular match days and quick polls especially in the knockout rounds.

More than anything else, the timeliness and accuracy of the information flow made CAF the reference point for many media outlets including us here at Africanews.

The quality of materials – photos, videos – posted on Twitter, Facebook and Instagram; coupled with the witty captioning and couching of information by the administrator (s) captured the attention of soccer fans around the world.

Perhaps as a direct result of the quality engagement and effective communication, CAF’s English Twitter account “run past” the million follower mark during the competition.

Amid the coordinated information delivery came slippages – rough tackles if you want. Two of these caught our attention over the period.

A goal was awarded to Ghana in a group fixture and was tweeted same but almost immediately deleted after it was disallowed. 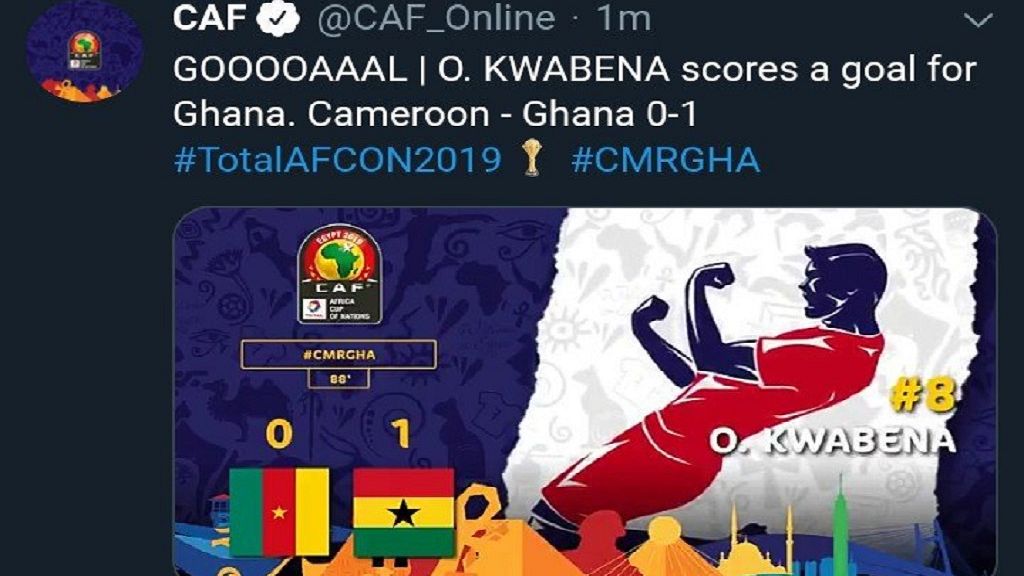 Similar situations were averted especially after the use of Video Assistant Referees, VAR, started at the last eight stage. At that stage, “goals” could be tweeted and afterwards VAR verification could be used to confirm or dismiss them.

The big blip / scandal was in the announcement of a centre referee for the final game between Senegal and Algeria. An announcement on the handle was deemed official for all intents and purposes.

Then less than 24-hours to the game, a new set of referees were announced by the CAF hierarchy. A BBC journalist in Egypt quoted the Djiboutian official who is head of the CAF Referees Commission as confirming that the social media team had put out “fake news.”

“This type of mistake should never happen. But the announcement of Gomes never came from the @CAF_Online Referees Commission.

“We must improve our communication as an organisation. What happened is not acceptable and people have the right to criticise us for this,” Souleyman Waberi is quoted to have said.

In explaining how that came about, it came to light that the social media aspect of the 2019 AFCON had been outsourced and a breach in information flow had caused that situation.

#AFCON2019 #ALGSEN final: The EXCLUSIVE and real story behind the confusion over the centre referee for this match: https://t.co/UXcAgEilll

A number of journalists who covered the tournament hailed the social media coverage as the best for the AFCON in recent times.

But in the spirit of growth and betterment, some key considerations were raised for CAF to consider for future tournaments.

Amongst them, dedicated social media pages for tournaments as this would boost the chances of proper archiving of coverage.

A more interactive aspect of coverage which situation in the case of AFCON 2019 was basically down to voting in polls.

Give and take, Egypt pulled off a historic tourney despite the heartbreak of a round-of-16 exit. CAF can now boast a big reform achievement but in doing so, the social media team behind the tournament are real winners – deserving of a medal.